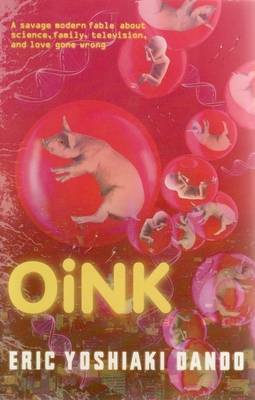 A young boy grows up in rural Japan, raised by his mother among the clamour of industrial machines at the local fish cannery. He has never met his father, an Australian genetic scientist as he pieces together his sense of identity from fragments of the family history. His only vision of the west is gleaned from his mother's favourite Elvis Presley movies. One day in the late 1980s he receives a plane ticket, along with a letter from his father telling him it is time for him to come and live in Australia.When he gets there he learns that his father is a rich and famous scientist and entrepreneur, well known for his bizarre inventions. He is quickly dragged into the crazy world of his father's top-secret genetic research and experiments into cloning. What follows is a surreal, black comedy, a seductively hip, hilariously funny satire of popular culture and consumerism. Oink, Oink, Oink is a savage modern fable about science, family, television, and love gone wrong.