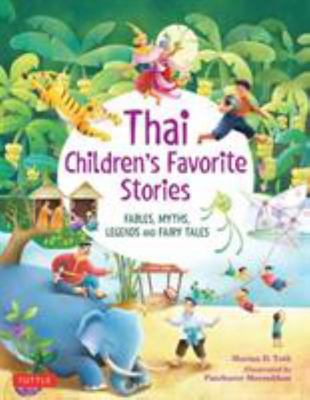 In captivating text and illustrations, this beautiful multicultural children's book presents a collection of cherished fables, myths, legends and fairy tales from Thailand that have been passed down through generations of Thai families.

The nine charming stories in this book feature clever princesses, warring gods and goddesses, foolish kings, and wily tigers, against a backdrop of traditional Thai village life. They deal with the universal values that parents everywhere want to teach their children, such as good versus evil, right versus wrong, and wisdom versus foolishness.

Stories include "How The Thais Learned to Be Calm," when a small village argument escalates into a terrible war; "Princess Golden Flower and the Vulture King," in which a brave princess saves herself from an evil king; and "The Gold Harvest" in which a wise father-in-law tricks his lazy son-in-law into working hard for his family.

Curated and narrated by Marion D. Toth and illustrated by Thai artist Patcharee Meesukhon, this collection will provide children with an insight into the traditional Thai culture, and the values and lifestyle of its people. This book will be enjoyed by children ages six to ten, as well as by their parents.

Other Thai stories in this book include: